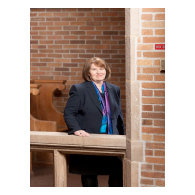 Dr. Lea Johnson, president of Maria College of Albany, New York. Johnson is nominated in the Education and Humanities category.

Johnson comes by her education career through her mother, Elinor Nemanich who taught English at Indian Trail Middle School. She graduated from Lewis University with a degree in psychology, and later earned degrees in public relations, nursing and higher education management.

Maria College named Johnson as its president in May 2012. She is only the fourth president and the first lay president in the school’s 57-year history. Johnson has earned praise for her spirit of transparency and open communication style. She has led the development of seven new baccalaureate degree programs, and has increased scholarship funding, among numerous significant achievements in her short tenure.

Before joining Maria College, Johnson served as dean of the School of Business at American International College where she restructured and improved the MBA and Healthcare Management programs.

Johnson has been nationally recognized for her work with curriculum development and partnership building.