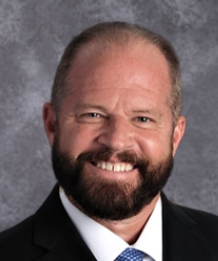 Dr. John Sparlin has had a successful education career, starting as a middle school teacher and coach at Humphrey Middle School in the Valley View school district.

Sparlin is in his third year as Superintendent of Schools for Community Unit School District 308 in Oswego.

Sparlin coached and served several athletes throughout his education career. His teams have won multiple conference titles and have had numerous state qualifiers and state champions. He was also honored in the 2004-2005 “Who’s Who Among America’s Teachers.”

During his tenure, District 308 has received several recognitions including being named one of the top school districts in Illinois. He has led District 308 though many challenges.

He truly believes in the power of community, values the opinions of others, and fosters positive relationships with his staff, community and local leaders.  He is regarded as a kind, sincere, caring person who always put others before himself.