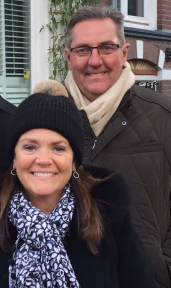 Both Debbie and Clayton Olsen have spent their lives living and making improvements in the Village of Plainfield.

Their latest development, Warehouse 109 and the surrounding Warehouse District, brought a much-needed venue to Plainfield.

They restored a worn-out old building/box factory into a destination for weddings, reunions and other events. The Warehouse District has added a brewery, coffee shop, distiller, dog training and other rentals.

Most recently they added a garden area to host outside weddings, creating an award-winning destination and venue that Plainfield can be proud of that also generates local jobs.

Over the years they have improved several other properties in Plainfield which adds value to all of Plainfield. Their work has been done with attention to detail and pride.

They are also the founding members of the Plainfield Irish Parade and VPA, and perennial Plainfield volunteers.

Deb Olsen has also served on many boards including the Central Elementary School PTA, Indian Trail Middle School PTO and the PHS PTSO.

As a Co-President of Central Elementary, she helped start Landscape Day that then took off at many of the District 202 schools.  Clayton Olsen has donated labor and equipment time to help various school and organization projects.

Both individually and as a team, the Olsens have made significant contributions to the work to make Plainfield a nice place to live.